This part of the website is used to record recollections of Houghton in times gone by. If you have any articles or photographs that you feel would be of interest, do please submit them to [email protected] and the Web Manager will, where possible, include the them on the website.

The Beehive Cottages fire (hover over the 'down' arrow under Houghton History at the top of this page)  recounts Norah Golden's memory of the August day in 1952 when lightning struck Beehive Cottage, on the road between Houghton and Broughton.  Norah Golden had been a ‘Land Girl, as members of the Women’s Land Army (WLA) were known. In 1952 she was living in the WLA Hostel in Houghton. Norah’s recollection, written in 1991 (when she was then living in Co Cork in the Irish Republic) was recently given to Geoff Butler by Mrs Doris Bailey, who had also been a member of the WLA.  The gallery below has an aerial view of the cottages.

Also in the gallery below is a photographs of village road in the early 1900's, showing what later became Vine Stores (converted to a private house in the late 1990's). The building was the original farmhouse for 'Barhams Farm',  originally owned by John Barham.  It is thought that he owned land in The Wallop Brook Valley from the late 1700’s until around 1850.

The Wheelwrights operated until around the 1970's when it became a carpentry works.  It was converted to a private dwelling in 2015.

This Youtube link https://www.youtube.com/watch?v=_2HkEzPI8_Q  shows a delightful film made circa 1960's of Mr Potter and his assistant Albie Bowles crafting a wheel and then wheeling it a few hundred yards up the village to Jack Burt the Blacksmith who surrounded the wheel in iron.

In November 2000 'The History of Houghton and Bossington' was published. This  comprehensive history of our village, reaching back to 2000 BC, was written by David Livermore, Alistair Dougall and Janet Davies (Janet no longer lives locally). All copies published at the time were sold.  However, an updated version is being prepared and will be printed as soon as it is available. 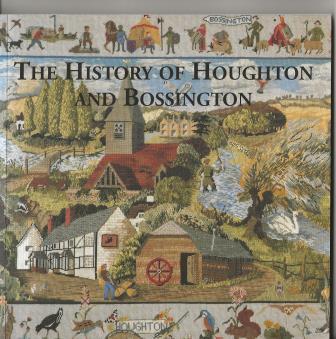 Cover of the November 2000 edition